There seems to be a lot of pessimism surrounding BMW’s latest crop of front-wheel drive-based cars. Both the BMW M235i Gran Coupe and the M135i hatch are drawing the ire of BMW enthusiasts the world over for powering the wrong axle first. Yes, both cars are all-wheel drive but they both prioritize their front axles.

Maybe that pessimism got to me, maybe it clouded my judgement, but I was not overly excited to drive the new BMW M235i when I had the chance to do so in Spartanburg, South Carolina. Despite that, I carried on and drove it anyway (champagne problems, I know). 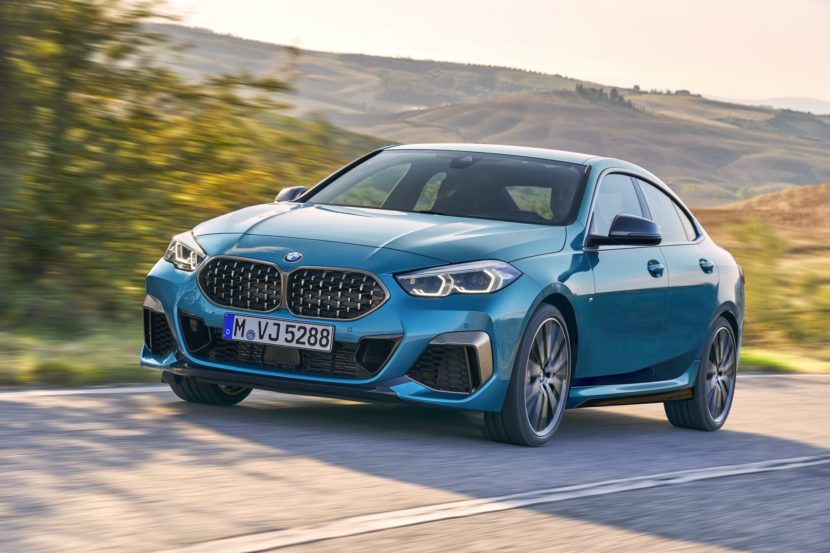 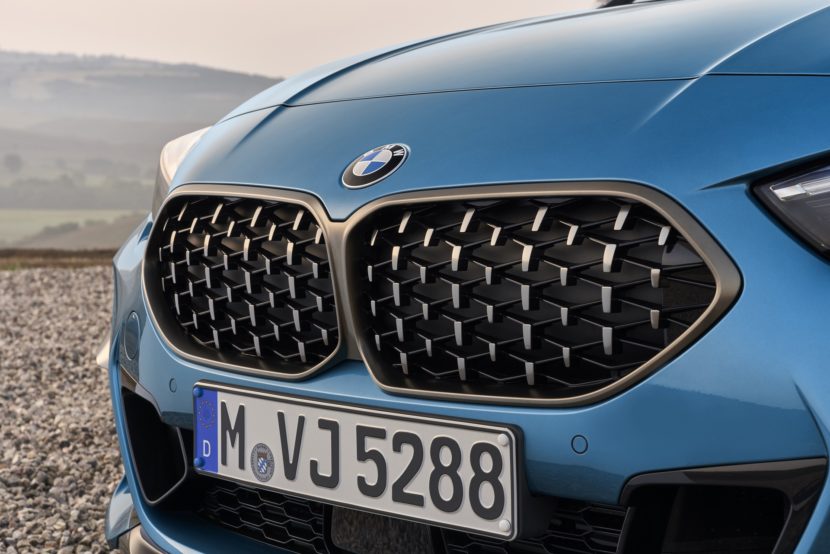 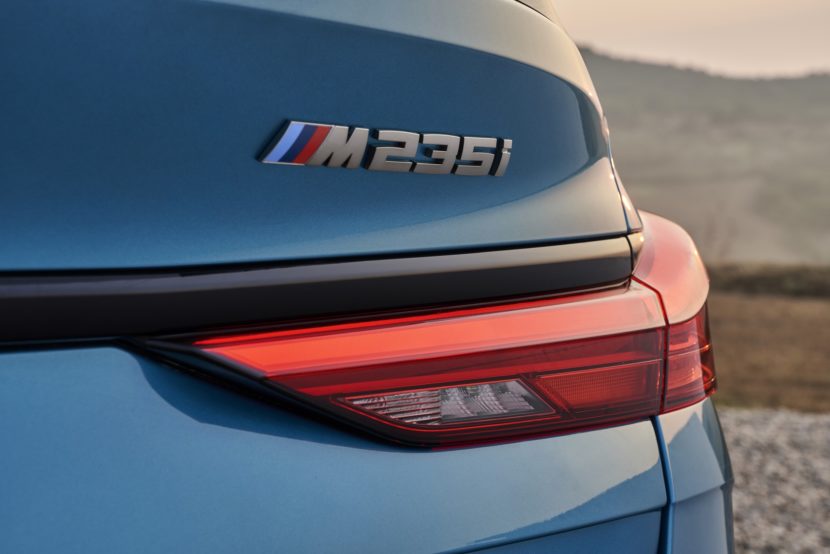 While at BMW’s “Test Fest” recently, I had the chance to sample the all-new M235i Gran Coupe on both road and track. So I’ll separate my driving impressions from each and then put it all together to see if the new front-wheel drive-based 2 Series is a real-deal BMW.

The car I drove was a pre-production, camouflaged car but it was close enough that it could properly represent the final production car. Though, due to its pre-pro nature, I won’t comment on build quality or material quality. I can, however, comment on what it was like to drive. Before we do that, though, let’s take a look at what the BMW M235i Gran Coupe is on paper.

Being based on BMW’s new FAAR front-wheel drive modular architecture, the BMW M235i Gran Coupe is a mechanical sibling to the M135i. In the US, we don’t get the latter, so that leaves the 2 Series Gran Coupe family as the only FAAR car we get at the moment. Being an M Performance model, the M235i is the flagship of the 2er GC lineup and it’s the fastest one BMW will ever make, as no true M model will be made from it.

Powering the BMW M235i Gran Coupe is a 2.0 liter turbocharged four-cylinder engine, that makes 301 hp and 332 lb-ft of torque, mounted sideways in the engine bay. I mention that last bit because it’s still odd to see a transverse engine setup in a BMW. Mated to that little four-pot is an eight-speed automatic gearbox, sourced from Aisin and power is sent primarily to the front wheels. However, the M235i also has a Haldex all-wheel drive system which, in a nutshell, uses an electronic clutch to engage the rear driveshaft and axles.

Though, making up for some of that is the fact that the front axle gets a Torsen limited-slip differential. That’s been added to reduce understeer and provide maximum grip at the front end, a necessary and welcome addition to a front-bias sports car. 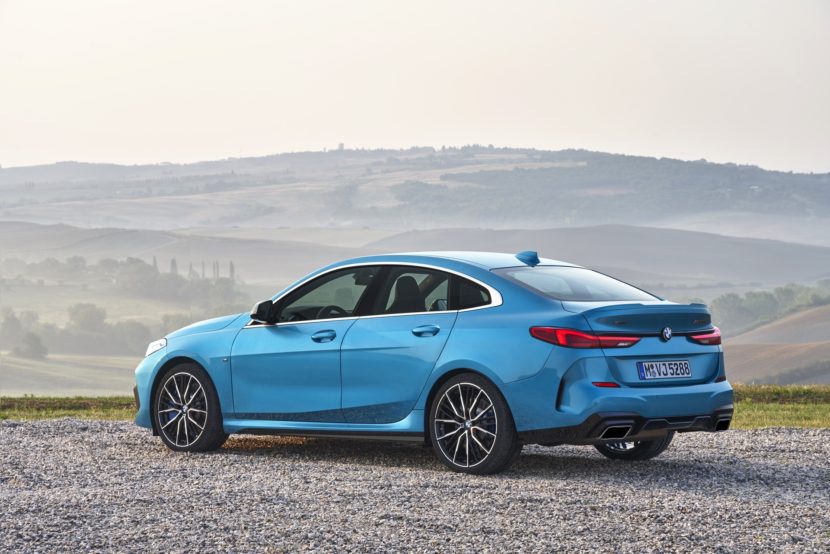 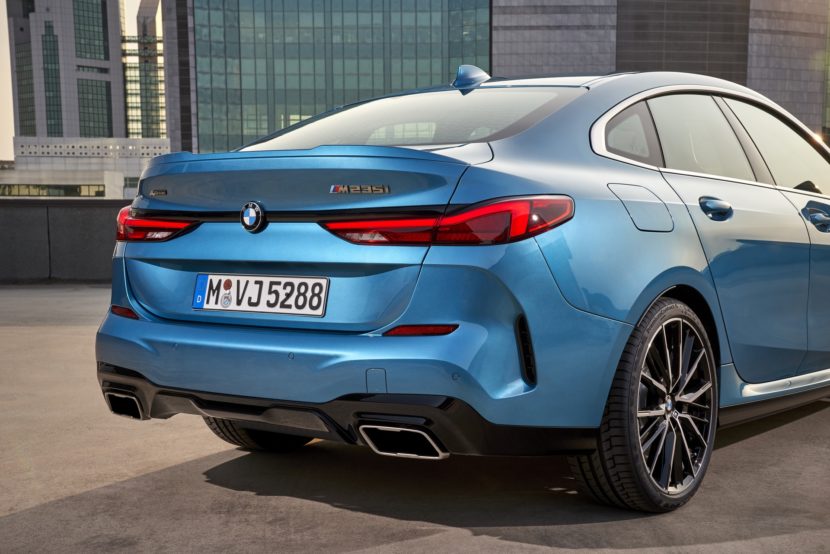 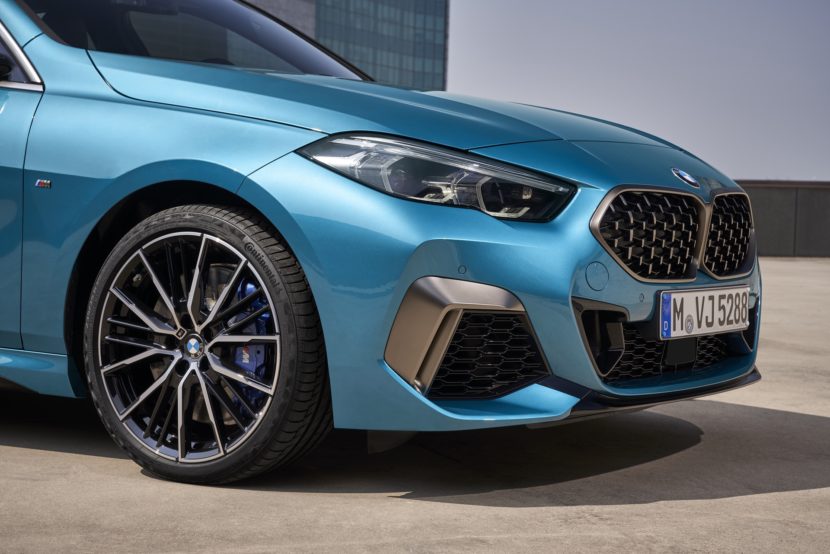 So how can this front-bias, all-wheel drive, automatic-equipped car that shares much of its equipment with some MINIs prove that it’s a proper BMW? Let’s find out.

This is where I started my time with the BMW M235i Gran Coupe. From BMW’s Spartanburg plant, I took the M235i out on some relatively twisty rural roads, which featured some decent little turns, all sorts of different pavement qualities and some straightaways to test the power. Basically, I drove it on the sorts of roads that most American buyers will be driving it on.

Power in a straight line is impressive, with a hefty mid-range punch once it comes on boost. Being a small, turbocharged engine, there’s a bit of lag down low but it’s short-lived and once the boost comes on, it’s more than quick enough. It’s also a refined powertrain, one that’s smooth and in keeping with the rest of BMW’s impressive powertrains. 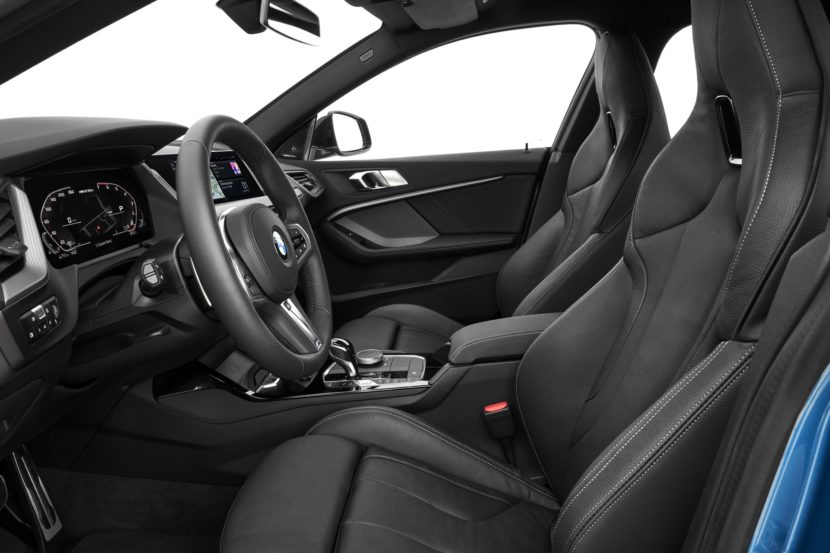 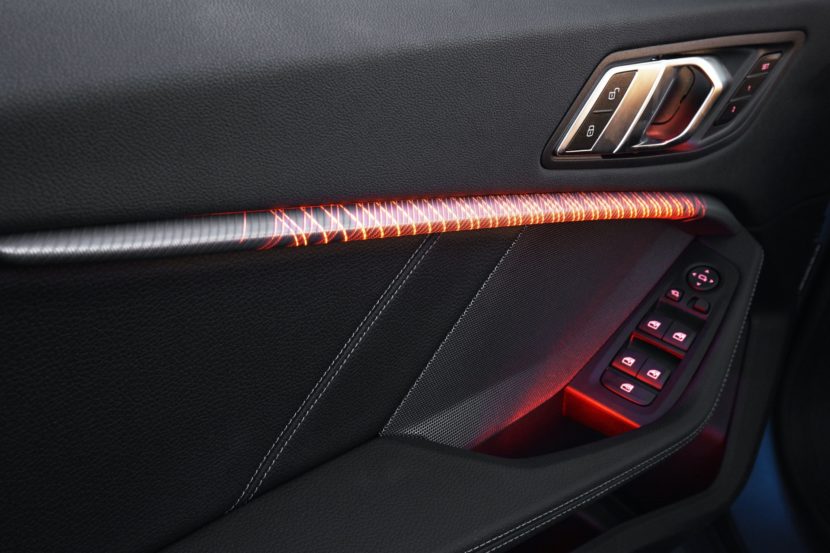 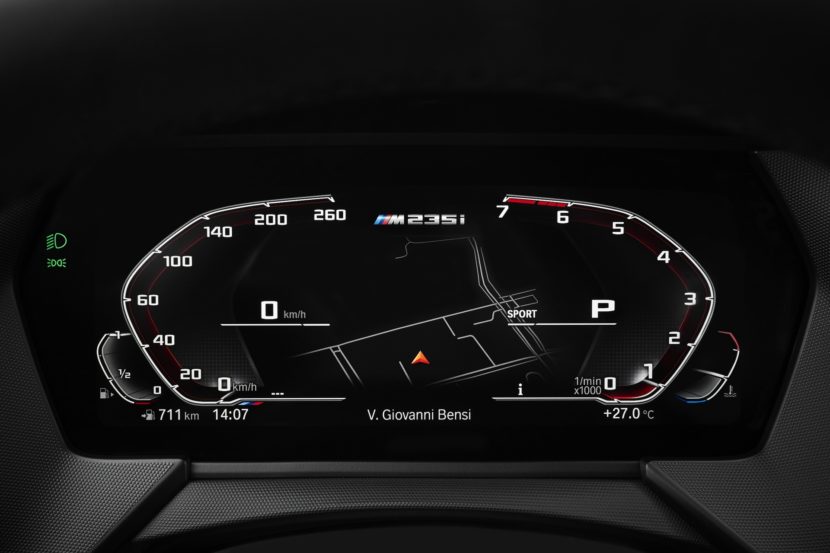 Shifts are quick, too. They’re not quite as sharp as those found in modern ZF-equipped Bimmers but no reasonable human will complain about the Aisin unit in the BMW M235i. They’re sharp, responsive and smooth. Left to its own devices, the Aisin gearbox is also clever and makes good decisions, consistently keeping the car in the right gear and eager to downshift on its own. In fact, the eight-speed Aisin might be the highlight of the powertrian.

When it came time to get twisty, the roads weren’t really good enough to test out the car’s handling. However, the steering is nicely weighted and more than sharp enough for road use. It’s light on feel but what car isn’t nowadays? Its weight does load up nicely when applying lock, so that helps in regard to feel. It’s not the best steering in BMW’s lineup but it’s certainly not bad.

What impressed me most on the road was its ride. Some of the roads surrounding Spartanburg are pockmarked at best, yet the little M235i handled them very well. Rough pavement can be real trouble for sporty cars with short wheelbases and firm suspension but the BMW M235i is supple enough and composed enough where they’re never an issue. It’s a firm car, make no mistake, but it’s a sports car after all. Yet, it’s just supple enough for everyday driving, even in areas with dodgy roads.

After pulling the M235i back into the Spartanburg facility, I came away with a positive impression. Sure, it’s not a bonafide thrill ride but it’s more than fun enough for daily use and it has no problem carving up a road. It’s not a 3 Series but it’s also not trying to be.

Following my road drive, I decided to jump into the BMW M235i Gran Coupe for some laps on the track. It was toward the end of the day and I had already driven some very fast, very impressive cars. So I honestly wasn’t expecting much. Plus, I was doing some lead follow while at the back of the line, with a BMW X6 M50i and an M5 Competition ahead of me. So I wasn’t setup for much success.

While the M235i is relatively quick, it simply could not keep up with either of the cars ahead of me. Even the big, lumbering X6 M50i rocketed away from me with ease. With my foot to the floor, the M235i couldn’t even begin to reel it in. Having said that, that was actually a blessing in disguise. 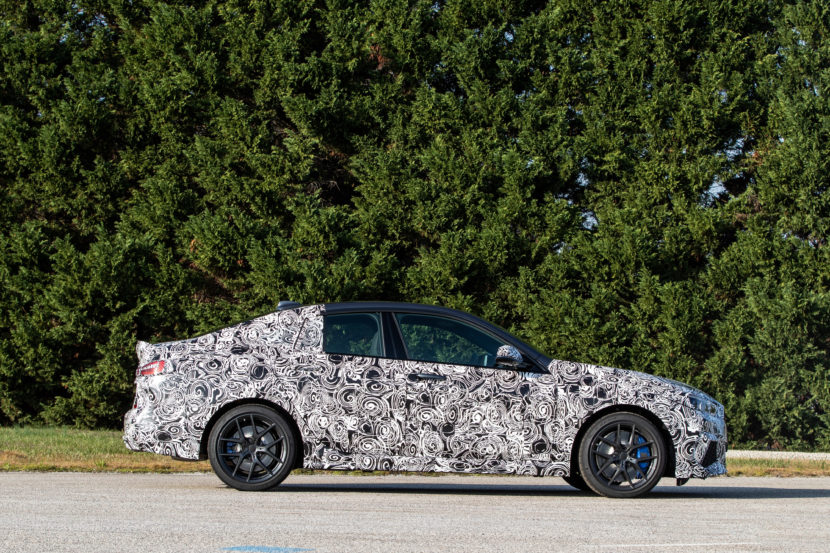 The Pre-Production Car I Actually Drove

All of that space between me and the X6 in front of me meant that I could attack corners the way I wanted without having to worry about braking at certain times to stay in line. Not that I’m a pro-driver and would have needed to overtake anyway, but the extra space was nice to play with.

And play I did. The BMW M235i Gran Coupe might not sound like fun on a track when looking at the spec sheet but it’s a surprisingly rowdy thing. Being front-biased, it’s never going to be as fun as something like an M2 or M3, or even an M24oi Coupe. However, if you accept that and just drive it like a front-wheel drive car, it’s actually a lot of fun. 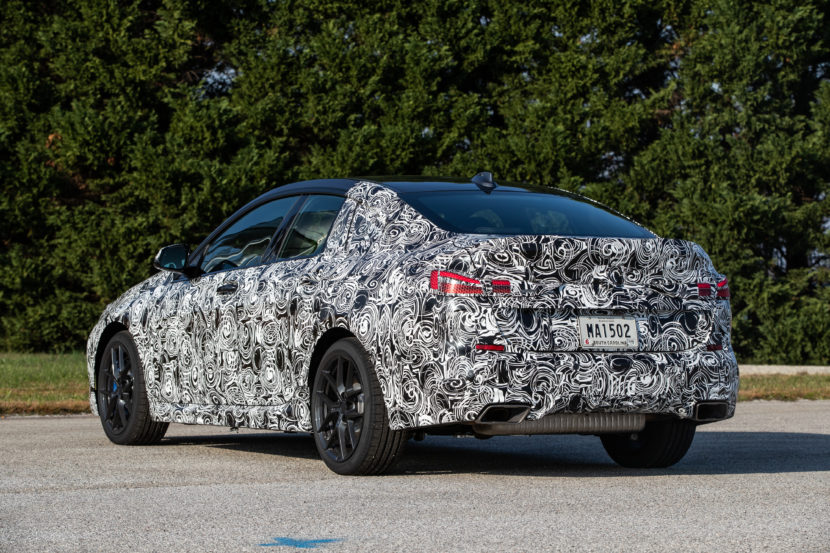 It understeers a bit but that actually helps it feel a bit safe and, after its initial understeer, that Torsen front diff and Haldex all-wheel drive system help to reign it all in. Then you can get back on the power and hustle down to the next corner. It’s not the most exciting car to drive on track and it’s not going to send shivers down your spine. But it certainly put a smile on my face and made me giggle a few times. It has a scrappy underdog feel to it, as if it’s more fun than it’s supposed to be, and there’s something very endearing about that.

So is it a Real BMW?

After spending a bit of time with the BMW M235i Gran Coupe in a variety of different circumstances, the answer to that question is, well…maybe. It depends on your definition of a BMW.

There are a lot of things to like about the new BMW M235i Gran Coupe. For starters, it’s fun to drive. Forget the emblem on the steering wheel, if you had no idea what sort of car you were in and took it out on the track, you’d have fun. Throw all preconceived notions of front-wheel drive BMWs away and the M235i is an enjoyable car to drive hard, even if it isn’t an absolute thrill ride. 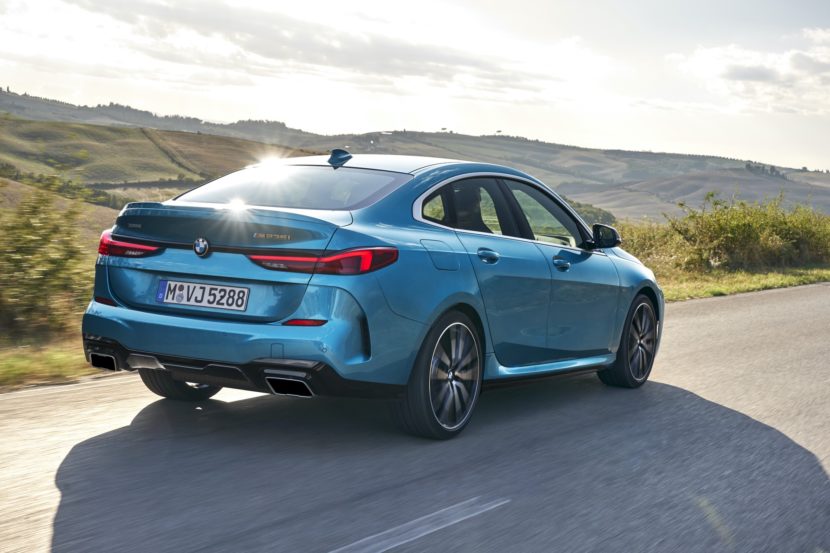 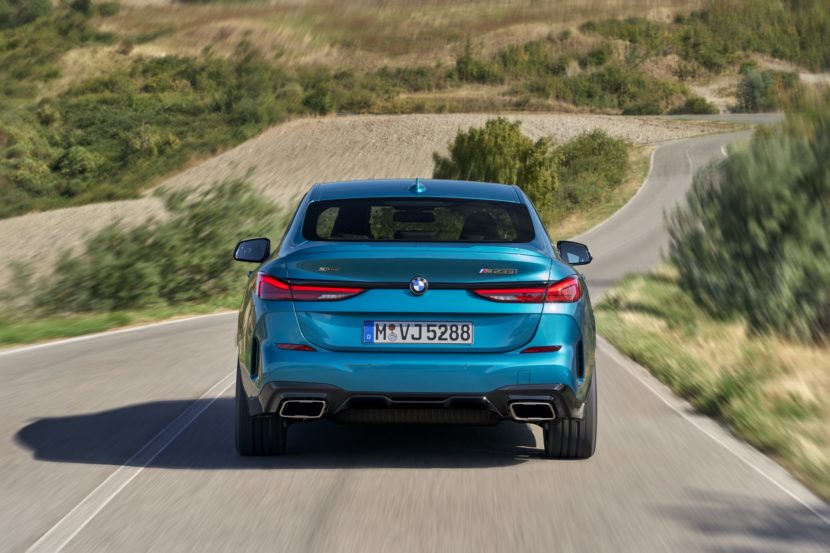 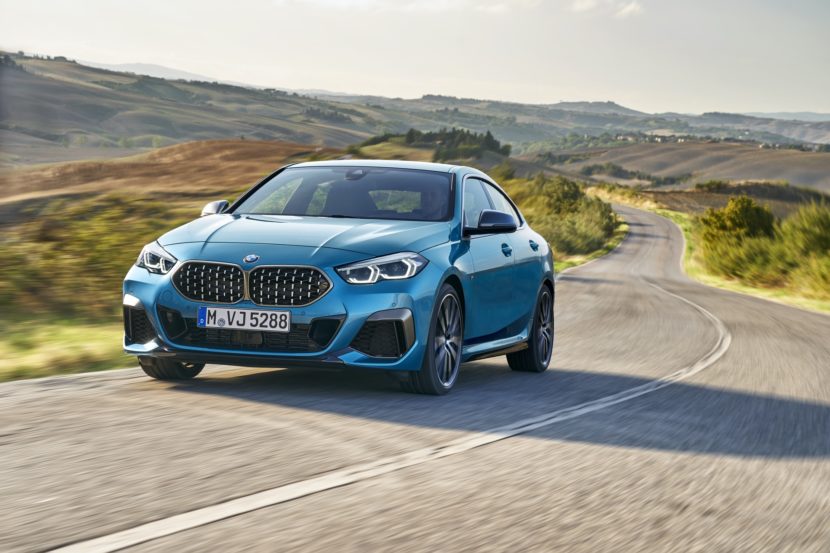 It’s powerful enough to be engaging on the road and is surprisingly quick. Despite being quick and sporty, it’s also quite comfortable, so it can be daily driven with ease. It also has a great interior, with lovely seats, a fresh design, great build quality throughout and some of the best tech in the segment.

Are there issues? Sure, it’s not perfect. I still don’t think it’s a good looking car but design is subjective and maybe I’m not the best judge of style. It’s also a bit expensive, being on the wrong side of $40,000.

Having said that, there are more positives than negatives. The biggest hurdle the BMW M235i has to clear is convincing BMW enthusiasts that it deserves a Roundel. Whether or not it does depends on whether or not you’re willing to accept a new kind of BMW.

If you can’t get over the fact that the M235i powers its front wheels first, then nothing it can do is going to convince you of its value. However, if a BMW is, in your mind, a small car that’s quick, fun to drive and has the right blend of good ride quality and sporty performance, then the BMW M235i is deserving of the badge on its hood. If you can open your mind to a BMW that’s fun in a different way, you’ll appreciate the BMW M235i for its charms. If not, that’s on you, not the car.

After spending a bit of time with the BMW M235i Gran Coupe in a variety of different circumstances, the answer to that question is, well…maybe. It depends on your definition of a BMW.

There are a lot of things to like about the new BMW M235i Gran Coupe. For starters, it’s fun to drive. Sure, it’s not perfect. I still don’t think it’s a good looking car but design is subjective and maybe I’m not the best judge of style. It’s also a bit expensive, being on the wrong side of $40,000.